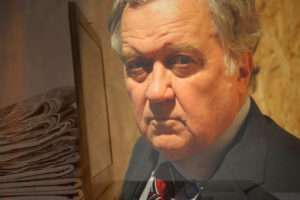 The cycle of another sad story about ‘us’ and ‘them’ is slowly but expectedly coming to an end. There will be no war, and the world, as usual, do not name winners and losers here, and we are all losers for now. Foreigners are struggling to come out of everything with their achievements, their goal: With the old teams, forward to new work victories (sic!) With small applause to those who do not agree to this either. ‘We,’ of course, still believe in unquestionable world justice and our right to solutions based on that justice. How could it be any different? “They,’ clearly, are doing their job here as everywhere else in the world. It is a project of spreading liberal democracy, based on interest. Here, neither our truth nor the bare reality has long been anything other than a mere fitting piece into their political business. It is also known who is who’s helper.

The powerful have long since stopped dealing with the unquestionability of former principles, values, morals, verifiable truths and facts. In fact, anything beyond legitimized selfish, one-sided interest.

Confusion Is Great, the Result Is Troublesome

Those who are not aware of this, lagging behind in some other times, upbringing and logic, are now blaming the world around us. Europe and all that across the distant seas and oceans on the occasion of the profitable collapse of their own home. They say they left us and deceived our former friends, ignored us and completely forgot. The confusion is great. The result is painful. There are less than three million of us who are important to them only if we agree to preserve the status quo on the line of new divisions.

Examples of this are obvious: Professional operatives of the world mantra on efforts to improve the situation in the ‘sovereign, indivisible and multicultural BiH’ are slowly opening the cards, with apparent growing nervousness after each meeting with the ‘leaders’ of this country. Just with those who are also the operatives of the chaos in which we live. Well, that’s probably why they are asked to be ‘leaders’ in accordance with their positions in repairing what they destroyed. An interesting logic of ‘legalism’ in foreigners that one can never reach here.

The messages from the world, in simple terms, are for now the following: Gabriel Escobar, the US Special Envoy for the Western Balkans, has no doubt at all that the economy here is at the heart of all the problems (?!). Those who eagerly awaited him are still surprised. Poverty is the result of terrible theft and ignorance but not a justified cause of drama. But why this is so, on whose accounts all the values of this state and collapsed society are registered – is not an interesting question for a foreigner. ‘Leaders’ do not talk about it. The crow does not poke another crow’s eyes out.

Matthew Palmer, in charge of the election law from the top of America, was at the heart of Covic’s factual need to subordinate everything to his position at the top of the state, forever, with the open need of Zagreb to ‘strengthen’ that need. And with the lie that this is the fate of all Croats in BiH. How miserable that ambition has come is shown by the miserable classification of HDZ leaders among those who, together with Dodik’s players, voted for the annulment of the Law against Genocide Denial. Such a shameful turn (if it is a turn at all) as he made on this occasion only for his own benefit – and in relation to a world unquestionable topic – is rarely seen in this area. It is also a great humiliation for those he represents. In addition, it is grotesque how Palmer, so to say, does not see the bizarreness of his persistent repetition as ‘they’, in fact, have no plan, concept, paper, for what they came for, leaving it to the ‘leaders’ here.

On that wisdom, Angelina Eichhorst, director of the European External Action Service, ironically repeated only what was already her undisputed priority: The election law must change immediately, because ‘time is running out’. For whom? For bureaucratic understanding of work or for solutions in accordance with European principles and historical realities in BiH.

All three mentioned, pushing the logic of that revised law around, tried to satisfy the ‘preservation of peace’ as much as they need now. Opening the way to new divisions in BiH is a topic for another future. That is not on the agenda now. The ‘leaders’ will already recognize that, and they do not lack the experience of ranking in that. As Izetbegović would say, ‘We are not from yesterday.’ If anything is true, here are the results thirty years after the beginning of ‘democratization’.

The logic of the pathetically expressed and allegedly huge efforts of the world to deal with them, as an important repair of the society and the state of Bosnia and Herzegovina, is grotesque, to say the least. And many here believed: as if they knew nothing more important there than repairing the ruined justice, democracy and human rights in Bosnia with its own crime humiliated. On the occasion of which the hands of various world banks and corporations created on credit slavery, their usurious investments, etc. have been rubbing their hands behind the curtain for a long time. And all according to the principle according to which the state planetary boulders settle accounts with each other, deceive and lie to each other in a way that was difficult to imagine more than half a century ago when a new world order was agreed upon, created by the UN with honourable charter, then the EU, respected zones of interest, blocs and non-blocks…

There are many examples. The latest of the big scams in partnerships, cooperation, trust with interests, etc. is, how the Great France got deceived by even Greater America. Washington turned its back on Paris in the Indo-Pacific zone. The planetary map is about the relations between America and the European Union. Biden simply concluded that Great Britain and Australia were much more important to him for the current problem with China than Paris and Brussels. And goodbye, geostrategically, militarily and financially. Biden is not too concerned that the endlessly offended Macron will immediately turn to small and large paschal against American interests – including the ‘discovery’ of the Western Balkans with old loves for Serbia and a new geostrategy and sold second-hand planes to Croatia. Except to the extent that it would not be a little interesting, China is working to give in to the Russians and their appetites in the Balkans and beyond.

It is important now to calm down the little ones here, to set fire to some young man in BiH who is losing ground, so they are no longer suitable spiders in the game of the big ones. Then, let’s move on.

Who in our country – especially in diplomacy that serves exclusively the interests of local ‘leaders’ and not creating capacity for a valid understanding of world politics and us in it – thinks to at least see what was once impossible and now lives and succeeds. There are many examples in the world: Iran and the ‘nuclear’ agreement, come in and go out, and now you would go back again. Thus agreed the anti-Chinese interest; Biden and the removal of the disobedient Netanyahu with all the love with Israel, but while playing as the patrons should; The Taliban are first the biggest enemy in that part of Asia, and then they are armed to the teeth with donated American weapons to maintain the necessary nervousness and instability in that zone; Until yesterday, even Hamas was great for blocking the so-called peace agreement in the Middle East and now, strengthened in the world’s crime against Palestine, and declared terrorists in England, just in case. These days and the peak of the misery and misery of world politics: the UN Human Rights Council has decided to end its mission in Yemen! Just morally, in line with humanitarian principles and the UN Charter as well as the dramatic images of starving children dying in Yemen. The interests of Saudi Arabia and the surrounding Gulf profiteers and partners – oil, weapons and business from arrogant totalitarianism in the sand – need to be settled.

Collective Madness and the Story of Us

Those who resolved their battles as they saw fit, did so primarily with their own hands, strength, wisdom, and in coordination with mutual agreements, compromises, and turning to the future rather than persistently past. It is completely different in us. We trust strangers in a way we never did when we were big. And that’s why we were respected then.

On the big stage, at the UN, Biden declares coldly that America will ‘resist the attempts of stronger countries to dominate weaker ones, whether through violent change of territory, economic coercion, technological exploitation or disinformation…’ Bitter joke. On Tuesday, the Russian ambassador to our country, Kalabukov, sat down by convincing Komsic and Dzaferovic that Moscow does not question the sovereignty, borders, and the whole of BiH. At that moment, Dodik was driving towards Moscow. There, Putin, as Dodik says, just asks him, ‘what do you need’. At the same time, ‘Justice’ is concerned: ‘Is it time for the return of the Russian Air Force to BiH?’ How, on the basis of which in that ‘sovereign čije’ whose ‘leaders’ the world supports with all its might.

And the birds on the branch today, after emissaries from the big world, see that there is nothing there but those chosen, appointed and paid to lead politics. In the assembly halls and in the taverns, it doesn’t matter. No meaningful policy can be pursued with small people, with a pocket mentality. The locals were robbed and afflicted by those chosen by the residents themselves, thus allowing them the ‘legal’ right to this fraud. And as long as that is the case, life continues on the trail of the people: Promise, a crazy man’s joy.

For a long time now, we have been collectively crazy in many ways, expecting that it will fix our lives from the outside. In the story about us, meanwhile, we have become the least important, in fact, irrelevant player.

A new case of illegal land allocation in Bratunac

Public procurement in Laktaši: There is always work for tender favourites

The former mayor of Bratunac illegally granted his son-in-law a lease of land for 20 years, criminal charges are pouring in